Akron, OH – It was a game highlighting one of the state’s top pitching prospects in Liberty Union’s Jacob Miller, arguably the hardest thrower at this year’s tournament.

In that respect Miller, the top-rated prospect in Ohio, didn’t disappoint, routinely lighting the radar gun in the mid-90s.

Scoreless for the first three innings, Waynedale broke through in the top of the fourth for a couple of runs after a leadoff walk and a triple by Tim Short.  Short later scored on a wild pitch off the glove of the catcher to put the Golden Bears ahead, 2-0. 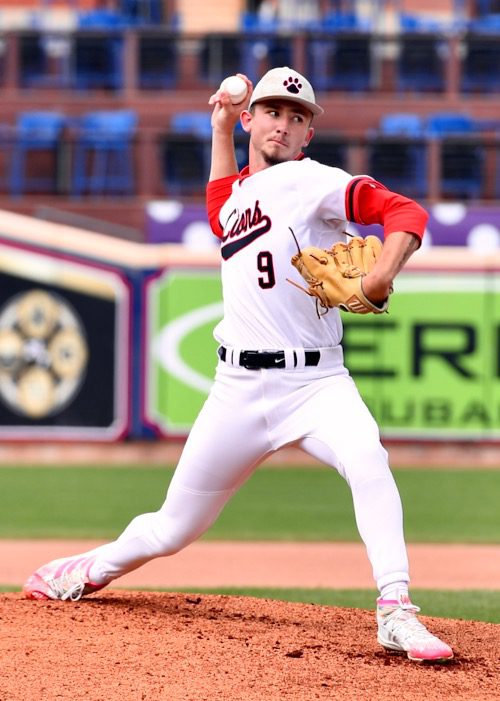 Liberty Union’s Jacob Miller struck out 10, but provided Waynedale too many free bases.

Liberty scored in the bottom of the fourth when Barkman loaded the bases through a leadoff double, a walk, and a throwing error.  However, Liberty would score just one run on a sac fly to left field…then saw Barkman retire the side on a foul ball popup and a strikeout.

Jacob Miller, a Louisville commit, wasn’t at his sharpest, and Waynedale would come back to score twice in the fifth on three walks, a stolen base, and a throwing error, jumping out to a 4-1 lead.

Liberty Union answered with a single run in the bottom of the fifth (4-2), then chased Barkman in the bottom of the seventh on a throwing error, a hit batsman, and an infield single.  Lefthander sophomore Otto Solorano came on with no outs, allowed just one of the inherited runners to score (4-3), and left the tying run on third base by striking out the final out of the game.

Apple Creek Waynedale advanced to the championship round against the winner of Roger Bacon vs. Milan Edison…with 4 runs on 6 hits, committed 3 errors, and left five men on base. Trey Barkman pitched six innings, allowed 2 hits, 3 runs, struck out 7 and walked 2.

Boys Of Summer: Baseball In The Shadow Of A Grain Elevator….

Hoard: No Soup For Buckeyes At Campbell

This Week In Basketball: One And Done Begins, And Now Every Game Counts…!